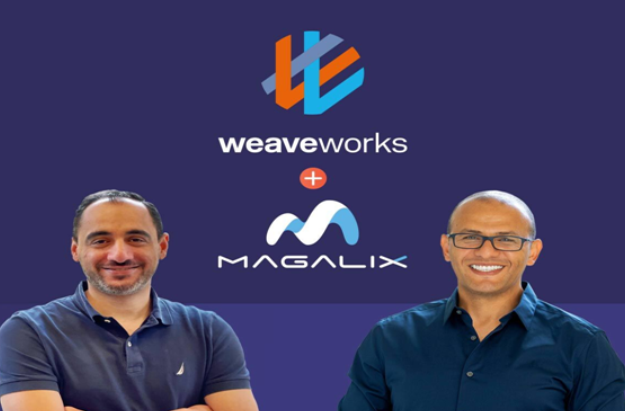 Weaveworks Limited, the GitOps company with headquarters based in London and San Francisco, has announced its acquisition of Magalix Corporation, an Egyptian-American cloud-security startup. Founded in 2017, Magalix successfully completed multiple rounds of investments, totaling 4.2 million USD.

Among Magalix’s biggest supporters and investors in Egypt include Egypt Ventures and Endure Capital. Egypt Ventures saw great promise in the Magalix team as an opportunity to invest in reversing brain drain from Egypt, by taking advantage of the quality talent available in the country and growing the corporation’s technical and software development teams locally.

Headquartered in the US, and with a strong R&D Engineering team in Egypt, Magalix built a platform that would enable organizations to embed security and compliance using DevOps methodologies. Security and compliance policies are “codified” and built into the system according to company- and sector-mandated “playbooks” and “recipes”. Magalix hired its first engineer in Egypt in 2019 and by 2022 the corporation has grown into a hardworking R&D team of 25.

Founded in 2014, Weaveworks helps teams adopt cloud native computing, managing cloud native infrastructure and applications quickly, reliably, and at scale. Weaveworks raised $36.65 million in their Series C funding round in December 2020,  led by some of the world’s leading public cloud and telecommunications companies, bringing total funds raised to date to $60 million. Some of the Weaveworks investors include Amazon Web Services (AWS), Ericsson, Google Ventures, among others.

“We are seeing an increase in customers who run a zero-trust security model turning to GitOps to bring DevOps to cloud-native application development and IT operations,” said Mohamed Ahmed, founder, and CEO of Magalix. “Similar to how DevOps disrupted infrastructure management, we believe that integrating security into GitOps pipelines brings considerable agility and speed, preventing errors and protecting against attacks that could shut down the entire platform. Imagine securing your platforms 100 times faster with very high confidence while evolving them. Weaveworks and Magalix share that joint mission to make it easy to innovate fast without jeopardizing security and stability.”

DevOps is a relatively new paradigm in the software industry. Essentially, DevOps is a set of practices that combines software development (Dev) and IT operations (Ops). The term GitOps, coined in 2017 by Weaveworks, is an operational framework used for application software development. A developer-centered approach to operating infrastructure, GitOps revolves around tools that developers are familiar with, such as Git. GitOps can be described as “DevOps for Kubernetes”.

The transformative trend of GitOps continues to gain broad mindshare with cloud platform teams as they automate continuous delivery and operations of applications and infrastructure. However, according to IDC’s 2020 survey, 67% of breaches in the cloud are caused by misconfigured applications or infrastructure. Trusted delivery adds policy as code to GitOps, enforcing security within the DevOps workflow.

With this acquisition, GitOps Trusted Delivery is now possible. Weaveworks and Magalix will deliver the following to their customers:

“Enterprise customers have made it clear that trusted application delivery is critical to the success of their increasingly complex cloud native platforms,” said Alexis Richardson, CEO of Weaveworks. “With the acquisition of Magalix, Weaveworks introduces customizable policies, compliance capabilities and comprehensive risk visibility into GitOps workflows, ensuring only authorized applications are deployed and there are no nefarious activities.”

Magalix is the first American-Egyptian company to be acquired in the DevOps and DevSecOps security space. Other cloud-native security startups made an exit in the last year – Bridgecrew, Alcide, Portshift, Soluble, NeuVector, – making this exit a significant stride for Egyptian entrepreneurs and engineers.

“At Magalix, we see Policy-as-Code as a key enabler for teams’ agility and productivity. Shifting left the enforcement of infrastructure security and best practices balances the need to move fast with ensuring a compliant and secure infrastructure. This is why I am excited about joining forces  with Weaveworks, where integrating Policy-as-Code practices into the GitOps model will unlock many new opportunities.  Together, we can help more customers  accelerate their adoption of cloud native technologies to help them achieve higher pace of innovation within their organization while striking the right balance between agility and trust,“ said Ahmed Badran, Magalix co-founder, and CTO.

Mohamed Ahmed  is an Egyptian-American engineer, entrepreneur, and thought leader who lives in the capital of the clouds, Seattle Washington. He graduated from the American University in Cairo and has a PhD in distributed systems and super computers from the University of Connecticut. Mohamed worked at leading technology companies, such as Microsoft and Amazon to redefine large scale IT infrastructure, aka cloud computing. He authorized peer reviewed papers in OS design and distributed systems performance engineering. Mohamed contributed to multiple cloud infrastructure products and worked closely with teams to make such a complex technology affordable to companies and teams that innovate through software.

Ahmed Badran is an Egyptian-American engineer and entrepreneur living in Seattle Washington. He has a master degree from Carnegie Mellon University in Software Engineering and 20 years of experience building cloud based distributed systems and leading high performance teams. Prior to founding Magalix, Ahmed has worked at many companies including Amazon, Walt Disney,  and Blue Origin, among many others. He was part of the Amazon Web Services team in the early days of defining and building the cloud.